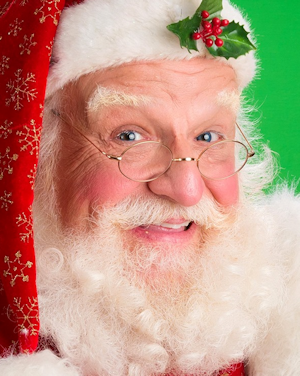 Ron Campbell was an 18-year-old college freshman when he answered an ad to give children rides in a horse-drawn sleigh on Christmas. “By the way,” his supervisor said, “we want you to wear this,” and handed him his first Santa suit. Despite not knowing Dasher from Dancer, or how-to ho-ho-ho, Campbell had an epiphany. He has now been Santa for more than a half century.

He has appeared numerous times in the televised Raleigh Christmas Parade, at hospitals, organizations, and civic events. Campbell has been a member of the Screen Actors Guild for over forty years and is as a storytelling Santa. He is one of the founding members of the Ambassadors of Christmas Cheer ukulele ensemble, which appears throughout the year at nursing homes and hospitals. Santa Ron’s wife, Paulette accompanies with her husband on many of his appearances.