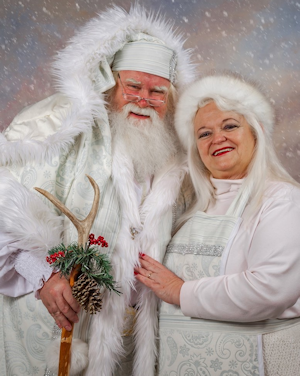 Santa John Wilder‘s first year to be Santa was in 1978 for his wife’s classes for the mentally challenged and continued on for 8 years.  As the years went on, it grew with many hospital visits to sick children and visiting many churches all thru the year and he became a Santa every day of the year. At his church, several friends call him Nick and believe that is his real name.

Today, he is Santa in many different venues but being able to share the true meaning of Christmas brings him the greatest joy as an ordained minister he loves to celebrate CHRIST-mas every day of the year. Joan Wilder met Joan at Lee University in Cleveland TN in 1974 and in 1978 she became Mrs. Claus becoming the wife of John. For over 4 decades they have been spreading Christmas cheer side by side. They have 2 amazing sons and 8 grandchildren as well as shared in the lives of 54 foster boys and 4 mentally delayed foster adults.