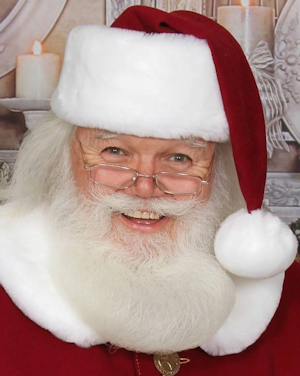 Jerry Owens retired after 37 years with the Department of Veterans Affairs in the engineering department. Before that he proudly served in the U.S. Air Force from 1970-74.

He has been in the red suit since 1991 and first started as Santa simply wearing a red sweatshirt and a Santa hat walking around the V. A. Hospital during Christmas time. He started to get comments about how much he looked like Santa. Diana, his wife said, “you would be a great Santa” and Jerry thought about it as he wanted to make those, he met smile and enjoy what Christmas is about; giving the from the heart. Since that day Jerry has been Santa Claus appearing around the Louisville, KY area and in Santa Claus, IN.