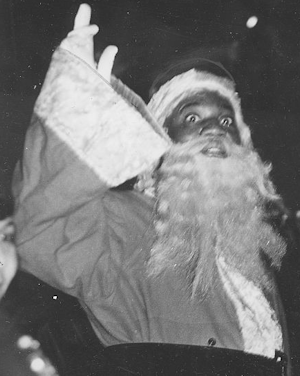 In 1928, the many talents of Robinson landed him in New York City, NY and on Broadway. During the Great Depression in the mid-1930s he saw many underprivileged and disadvantaged children in and around the city.

At Christmas he saw the need for some “Christmas Spirit” for all children. In 1936, Robinson donned a Santa Claus Suit for the very first time to entertain the impoverished children of Harlem. He was by no means the first black Santa, as the Volunteers of America put a black Santa on the streets of Pittsburg, PA years earlier. But with the name recognition of Robinson, the door opened and soon black Santas could be found in New York City, NY and Chicago, IL.