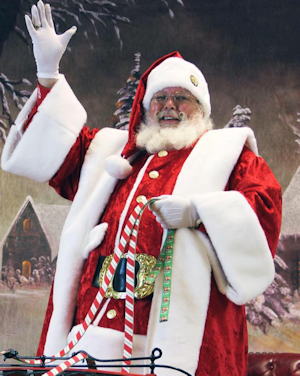 A professional Santa with over 20 years of experience, Rex Ray has appeared in numerous parades, special events and on local television. A complete portfolio of Santa work is not his only expertise. Along with his with wife Darleen, Rex has converted their home into a sort-of Santa’s workshop to tailor costumes for thousands of Mr. and Mrs. Clauses across the world. Besides suits, the couple makes a variety of custom-made accessories, including garment bags, boot bags, ball caps, vests and patches. The Ray’s often take their “Santa and Mrs. Claus” merchandise to national conventions, local group gatherings and tradeshows. It’s not all about the costuming Rex will tell you. “You don’t pick the suit, the suit picks you,” Rex says. “Santa’s here in the heart.”