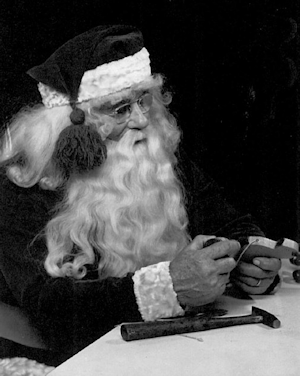 To the thousands of orphaned children who grew up in the greater Fort Wayne, Indiana area in the 1920s through the 1970s, J. Roland Muhn is Santa Claus.

He invited the orphans to write Santa a letter in November, so they would not be disappointed with their gifts. For over 55 years, he played the role as warmly as anyone who has donned the red suit.
Muhn even had his own Santa’s workshop of sorts. After opening the Silver Moon Toy Company in the mid-1920s, he often gave the toys to children, and the generosity continued until the end of his life, when as an Auburn nursing home resident, he would send hundreds of Christmas cards to adults he had helped as children. “Each card contains a $1 bill, $5 bill or 50-cent piece, a longstanding tradition,” United Press International reported in 1984 after Muhn was named one of 10 “Grandparents of the Year” by the National Council for the Observance of Grandparents Day.