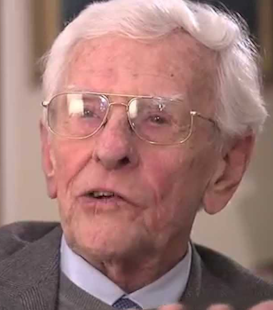 Richard Brookins first portrayed St. Nicholas during World War II. In December of 1944, American soldiers from the 28th Infantry Division were stationed in the village of Wiltz, Luxembourg.

Knowing they wouldn’t be home for Christmas, Corporal Harry Stutz and Corporal Richard Brookins, decided that the next best thing would be to celebrate the holiday in Wiltz.

On December 5, 1944, Corporal Brookins, dressed in cleric’s vestments and a bishop’s miter, brought gifts and treats, donated by the American GIs, to the children of Wiltz.

Because of Brookins and the other soldiers who brought St. Nicholas Day back to the children of Wiltz, the village began a tradition that continues to this day to remember the American St. Nicholas and all the soldiers.