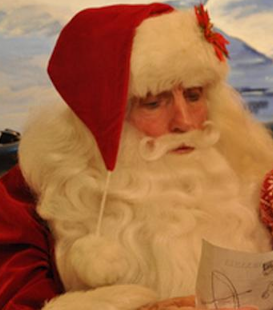 John Buckreis, “Dr. John,” has known Santa Claus his whole life. From growing up in an orphanage and foster homes in Buffalo, New York to working at various stores during the holiday season, Buckreis has helped Santa spread the true meaning of Christmas for over 70 years.

John Buckreis began his role of Santa Claus at age 14 when he fell asleep in a church and dreamt the spirit of St. Nicholas told him to be the “21st Century Santa Claus.”

Buckreis made a red suit out of bed sheets and cotton balls, and went door-to-door in a wealthy neighborhood singing Christmas songs in exchange for toys. After collecting many toys, Santa went to a poor community and left a toy at each door.