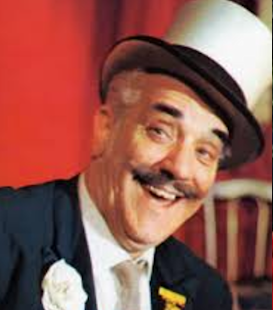 Better known as “Professor Tribini”, Christian Jørgen “Tribini” Nielsen was the creator and founder of the World Santa Claus Congress at the Bakken Amusement Park near Klampenborg, Denmark.

Nielsen appeared for many years as a Danish Santa in Copenhagen and thought, “Why not have Santas from around the world come to Denmark each July for a sort of Christmas in July event?”. And so in July of 1957, Bakken hosted the first World Santa Claus Congress. It was a wonderful success and received some very good media coverage, not only in Denmark, but in other countries as well.

In the month to follow, Santas in other countries learned of the World Congress and wrote to the Professor, asking if they could come to the next Congress. And so it became an annual event, with hundreds of Santas from around the world traveling to Bakken each July. Since 1957 the event has grown, hosting thousands of Santas and tens of thousands of Bakken guests for a wonderful “Christmas in July!”