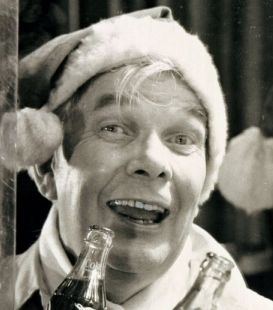 Since the artist known as “Sunny” painted the iconic Santa Clauses for the Coca-Cola Company, beginning back in the 1930s, Santa portrayers the world over had tried to emulate the iconic look that he created.

Born to a Swedish family, Haddon Sundblom studied his craft at the American Academy of Art. From there he began to create paintings with such warmth and style that he was a natural choice for many advertising agencies and products, including Coca-Cola. Sundblom’s Santa solidified the modern image of Santa Claus.

In classic red and white, his larger than life representation of the warm, gentle Santa was different to the other interpretations of the time. These vibrant, lifelike paintings were an instant hit with the general public.

Though he is most remembered for these wonderful illustrations, he also created Sprite Boy for the Coca- Cola Company and the famous Quaker Oats Man. For his works, Haddon Sundblom has a solid place as one of the 20th Century’s most influential painters of popular culture.