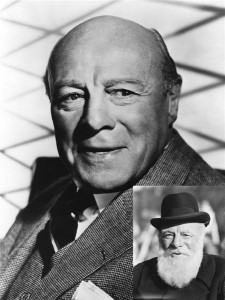 One of the better known and most successful character actors ever, Gwenn was a magnificent screen presence with his stocky physique, twinkling eyes and kindly demeanor, not to mention his smooth and soothing voice. He was born in Glamorgan, Wales on September 26, 1875 of a stern Civil Servant father who actually turned him out of the household at the age of 17 when he expressed a desire to become an actor.

Fulfilling his dream he headed for London and the British stage where he was discovered by playwright George Bernard Shaw who cast him in his play, “Man and Superman” and other subsequent productions. After serving in the army in World War I he migrated to Hollywood where his film career blossomed and eventually he won the Oscar in 1947 for his memorable role as Kris Kringle in “Miracle on 34th Street.”

Gwenn also appeared in the Macy’s Thanksgiving Day Parade in 1946 and 1947 as Santa Claus.