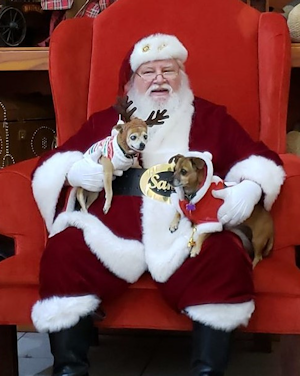 Santa Gordon Bailey is the originator of the Santa and the Business of Being Santa School, has been a professional Santa Claus for nearly 40 years. The School is comprised of franchised, trained lecturers, working from three expansive workbooks covering performance and management skills for Christmas Performers.

His resume also includes lectures at numerous Santa gatherings including the International University of Santa Claus, Discover Santa, and the annual FORBS luncheons. As Santa, he makes appearances at large civic events, stores, and private venues. He’s also a “pet friendly” Santa often posing with people’s family pets. He is an active member in many of the Professional Santa Claus organizations. Bailey is also an accomplished magician and is a contributing writer the Magic Castle Library in Los Angeles.