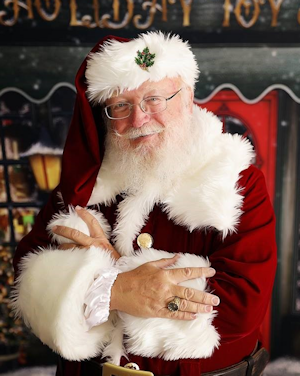 Santa Jac Grimes is a lifelong resident of Guilford County and currently lives in Greensboro, North Carolina. His Santa community service contributions rival Santa’s list of presents. He’s Santa for Fox 8’s free concerts at the Greensboro Coliseum and Lawrence Joel Coliseum. On Christmas Eve, he and his wife of over 45 years make the rounds at a women’s hospital to have his picture taken with babies. He’s worked at Kids Path, a hospice unit for kids with serious illnesses or grief.

“When people are in the middle of dealing with illness, they need a sense of normal,” Grimes says. “At Christmas, what’s more normal than Santa?” Grimes is a founder of the International Brotherhood of Real-Bearded Santas and has served as National Chairman of the Board. He holds an Advanced Master’s Degree of Santa Claus-ology from the International University of Santa Claus.