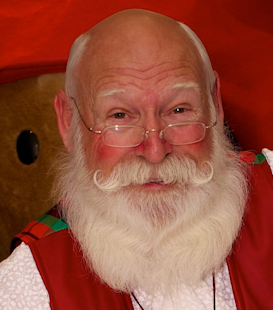 James Dyer first donned the Red Suit in 1975. Dyer is a graduate of the Charles W Howard Santa School, The International University of Santa Claus, and has won the 2016 Keep Christ in Christmas award. He has been featured in the News & Observer, The Wake Weekly, The Biblical Recorder, 919 Magazine, and The Rolesville Buzz.

He has also appeared on local and national television.

Dyer grew up in a North Carolina orphanage and learned to enjoy the wonders of Christmas from a very early age. He was a career military officer and served in Vietnam as a helicopter pilot and retired as a lieutenant colonel.

He became an ordained minister after retirement from the Army. His mission today is to make the reason for Christmas clear to all children around the world and celebrating Jesus’s birthday.